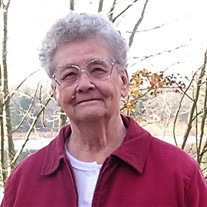 Anna May Hiltebrand (nee Graham), age 98, passed away on Tuesday, April 16 at Southgate Health Care Facility in Carneys Point, NJ. She was born on February 19, 1921 to George and Theresa Graham (Eble). Anna was born in Philadelphia, PA and grew up in Penns Grove, NJ. She attended Penns Grove High School. She was preceded in death by her husband of 53 years, Joseph Hiltebrand, and her brothers George, Raymond, and Elmer Graham. After Anna and Joe married, they made their home on a farm in Pedricktown, NJ. She worked as a clerk for DuPont Chambers Works before they started their family. Anna and Joe worked side by side on the farm, and she made sure things ran smoothly on the farm when Joe worked shift work at the DuPont Carneys Point plant. Their lives were built around the farm and their children. She and Joe were devoted to their family and worked tirelessly to provide their children with not only everything they needed, but with extremely happy childhoods. Anna is survived by three children: Jo Ann O’Hagan (Frank) of Wilmington, DE; Janice Gagliardi (Adam) of Carneys Point; and Michael Hiltebrand (Christine) of Pedricktown, NJ. She had eight grandchildren: Darren O’Hagan, Kelly O’Hagan Barnes (Matthew), Ryan O’Hagan (Megan), Adam Gagliardi III (Emily), Lauren Gagliardi Kelley (Kevin), Joseph Gagliardi (Courtney), Joseph Hiltebrand, Jackson Hiltebrand, and Sara Andrusiw. She had six great-grandchildren (Alaina, Liam, Grace, Isabella, Nolan, Colin, and Lennon). She also had many nieces and nephews who loved being in her presence. The family wishes to thank all of the nurses and aides at Southgate for looking after Anna with kindness and compassion. Visitation for family and friends is on Monday, April 22 from 6 to 8 p.m. at Ashcraft Funeral Home, 740 South Broadway Pennsville, NJ 08070. The funeral service will be on Tuesday, April 23 at 11 a.m. at the same location. Interment will follow at Hudson United Methodist Church Cemetery located in Pedricktown, NJ www.ashcraftfuneralhomes.com

Anna May Hiltebrand (nee Graham), age 98, passed away on Tuesday, April 16 at Southgate Health Care Facility in Carneys Point, NJ. She was born on February 19, 1921 to George and Theresa Graham (Eble). Anna was born in Philadelphia, PA and... View Obituary & Service Information

The family of Anna May Hiltebrand created this Life Tributes page to make it easy to share your memories.

Anna May Hiltebrand (nee Graham), age 98, passed away on Tuesday,...

Send flowers to the Hiltebrand family.