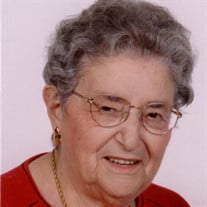 Angelina “Angie” DiPietro Yulo of Carneys Point, NJ passed away surrounded by loved ones on April 23, 2017 at Cooper Hospital in Camden, NJ. She was 97. Born January 18, 1920 in Penns Grove, Angie was the daughter of the late George and Filomena (DiGuilio) DiPietro. In 1947 she married her husband of 69 years, Daniel Joseph of Camden. After only a few months in the city, they would live the rest of their lives together near her childhood home of Penns Grove, surrounded by her family and friends from her mother’s birthplace, Valle San Giovanni, Abruzzo, Italy. Angie was kind, strong-willed, and intelligent. After graduating Penns Grove High School, she worked at Woolworth’s 5 and 10. She was a secretary for the Pedricktown DOD during the war and took night classes until graduating from Goldey-Beacom College in Wilmington. She continued at the DOD until her son was born and later worked as a secretary for Jane A. Williams Real Estate. Angie was skilled and adventurous in the kitchen: trying out new recipes, perfecting traditional Italian dishes, baking cookies and her signature chiffon cakes, and teaching everyone how to make pasta. Family meant everything to her. Her house was ever open for company or big family parties and she always made time to visit family and friends, near or far. She adored her grandchildren, teaching them pasta-making, cooking, and baking secrets; chaperoning school trips; caring for them when sick; and hosting countless sleepovers. Every night Angie said the rosary and prayed for her family. Each Sunday she went to church until she could no longer drive and thereafter watched mass on TV. She was an active member of the St. James’ Parish community. She is survived by her loving husband, Daniel Joseph; son, Daniel Michael and wife, Patricia (Nothdurft) of Clarksboro; granddaughter, Jennifer and spouse, Daniel Thomas Lay; grandson, Daniel John; great-grandson, Sebastian Lay; sister, Susan (DiPietro) Davis; and sister-in-law, Marie (LaRosa) DiPietro both of Carneys Point. In addition to her parents, Angie was predeceased by five brothers, Antonio, Albert, Alfonso, George and Fredrick, and one sister, Santa. Family and friends can call on Sunday, April 30, 2017 from 6 to 8 pm at the Ashcraft Funeral Home, 740 South Broadway, Pennsville, NJ. Mass of Christian Burial will be celebrated 11 am Monday at Corpus Christi RC Church, 369 Georgetown Road, Carneys Point. Interment will follow in Eglington Cemetery, Clarksboro, NJ. Flowers may be sent to Ashcraft Funeral Home or contributions made in her memory to Catholic Charities at https://catholiccharitiesusa.org/. www.ashcraftfuneralhomes.com

The family of Angelina "Angie" DiPietro Yulo created this Life Tributes page to make it easy to share your memories.