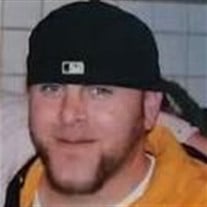 Andrew (Andy) Panichelle was born in Latrobe, PA on June 11, 1980 to the late Mary Ann Rodkey (d. 2016) and David Panichelle, and grew up in Pennsville, NJ. Andy graduated from Pennsville Memorial High School in 1998 and recently resided in Newark, DE. Andy is survived by his devoted girlfriend of 10 years, Jessica Knowles and their son, Drew. He is preceded in death by his mother, Mary Ann Rodkey of Wilmington, DE and by his sister, Katie Panichelle (d. 2017) of Devon, England, and survived by his father, David Panichelle of Wilmington, DE; a sister, Amy (Ken) Seitel of Fairfield, CT; a multitude of loving aunts, uncles and cousins; four nephews; one niece; and an abundance of long-time friends. Andy worked at Clark & Sons in Newport, DE as a garage door mechanic; at Mesco in Thorofare, NJ as a forklift operator; at M&S Painting, in DE as a painter; and at M&M Sporting Clays in Pennsville, NJ, which he enjoyed the most of all his jobs and was known for his efficiency and professionalism. Andy enjoyed fishing with his son, fly fishing with his father, hunting, shooting sporting clays, camping and spending time at the beach; and he loved watching the Pittsburgh Steelers. Andy perhaps had one of the largest collections of 59FIFTY hats in the tri-state area (at least one to match every outfit), rivaled only by his vast collection of lighters which were gifted to him by his close friends and family over the years. Andy cherished the time he spent with his immediate family and his extended family in PA. The highest points and proudest moments during Andy’s life were with his loving girlfriend, Jessica and their son, Drew. Andy’s final wish was to give the gift of life through the donation of multiple organs. A viewing will be held Sunday evening from 6 to 8 PM and Monday morning from 10 to 11 AM in the Ashcraft Funeral Home, 740 S. Broadway, Pennsville, NJ where a funeral service will be held at 11 AM. Burial will be private.

Andrew (Andy) Panichelle was born in Latrobe, PA on June 11, 1980 to the late Mary Ann Rodkey (d. 2016) and David Panichelle, and grew up in Pennsville, NJ. Andy graduated from Pennsville Memorial High School in 1998 and recently resided in... View Obituary & Service Information

The family of Andrew David Panichelle Sr. created this Life Tributes page to make it easy to share your memories.

Send flowers to the Panichelle family.