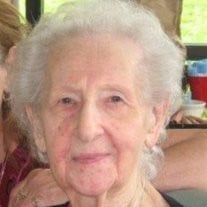 Amelia “Millie” M. Cooper, age 93, a lifelong resident of Penns Grove, passed away Saturday August 24, 2013 at Oakwood Healthcare Center in Philadelphia, Born in 1920; she was the daughter of the late Enrique and Melitona Menendez who emigrated from Spain in 1918. Millie leaves a legacy of dedication and service. She modeled perseverance in difficult circumstances. Between 1955 and 1960 she cared for her bedridden mother until her death. In 1957, her husband was diagnosed with cancer and she cared for him until he lost his battle a year later. And she did all this while raising three children. In the 60’s, she turned her full focus to them, stressing the importance of education, teaching them a work ethic and making sure they attended Mass every week. After her children were raised, she served as a clerk for West Main Pharmacy. Her favorite recreational activities were Bingo with friends and accompanying them on bus trips to Atlantic City casinos. Friends who were no longer able to drive could count on Millie and her car to be available to take them wherever they needed to go. She was a member of the former St. James RC Church, the Altar and Rosary Society of St. James, and the Penns Grove Democrat Club. She was predeceased by her husband Carl, her brothers, Raymond and Henry Menendez, and a nephew, Raymond Menendez, Jr. Surviving are her children, Carl James Cooper and his wife Mireille, Robert Charles Cooper and Patricia Ann Gaither. Also surviving are her grandchildren, Tara (husband Matt) Osborn, Dana Cooper, Jared Cooper, Skyler Cooper, Jami (husband Justin) Mensch, Carl Gaither and Curt Gaither, four great grandchildren and one nephew, Joseph Menendez of California Funeral services will be held 11 AM Saturday at the Ashcraft Funeral Home, 47 State St., Penns Grove. Friends are invited to visit with the family from 10 to 11 AM. Interment will follow in Riverview Cemetery, Penns Grove. In lieu of flowers, the family requests contributions be made to the Alzheimers Association, Delaware Valley Chapter, 399 Market St., Suite 102, Philadelphia, PA 19106.

Amelia &#8220;Millie&#8221; M. Cooper, age 93, a lifelong resident of Penns Grove, passed away Saturday August 24, 2013 at Oakwood Healthcare Center in Philadelphia, Born in 1920; she was the daughter of the late Enrique and Melitona Menendez... View Obituary & Service Information

The family of Amelia M Cooper created this Life Tributes page to make it easy to share your memories.

Send flowers to the Cooper family.