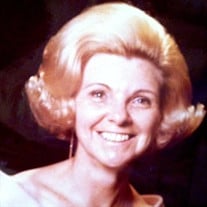 Alpha Omega (Spencer) Mangiocco, age 95, passed peacefully from this life on September 29, 2018, at Southgate Nursing Home in Carneys Point. She was born in Barren Springs, VA on February 15, 1923, and is the daughter of Corby and Maude (Horton) Spencer. The family moved to NJ in 1934 and she lived most of her life in the Penns Grove/Carneys Point/Pennsville area. She graduated from the Deepwater School in 1938. Alpha attended Penns Grove High School and was involved in school plays. At age 73, she earned a 2-year degree in Biblical Studies. She was a seamstress and had a 30 year career at Linsk of Philadelphia (later called the Penns Grove Dress Factory), and she was the manager there for 20 years. She also had a very successful home business, Alpha Omega Bridal Salon. Alpha also volunteered through the years with many different local organizations. In 1941, Alpha married Cosmo and they were together 62 years until his death in 2003. Their life together was a great journey. They were their sons’ biggest fans as they played sports growing up. After that, their attention moved to cheering on the grandkids. Then as the family grew, they cherished the great times they had with their grandchildren and always looked forward to hosting the family gatherings and preparing those delicious dinners. They saw much of America and had the opportunity to visit Hawaii, Canada, and Italy too. Wherever they lived in their retirement, they found a local church to attend and they also looked forward to going to Camp Meetings. Alpha knew God’s Word and was strong in her faith. Conversations with her always included talking about the Lord. She prayed faithfully every day, and prayed often for those in need. In addition to her husband, Alpha was also predeceased by her first child in 1941, and all her siblings: Margie Spencer 1921, Carless Spencer 1988, Troy Spencer 1998, James Spencer 2010, and Dorothy Spencer Gouse 2016. Alpha is survived by her sons and their families: son David (Gail) Mangiocco of Penns Grove, granddaughters Rhonda (Don) Townsend of Lake Clarke Shores, FL, and Patty (Steve) Shivers of Clarksboro, grandsons Bill Zane and his son Dominic of Carneys Point, Greg (Lori) Mangiocco and their children Alex, Dominic and Gabriella of Bedford, TX, and Deron (Johanna) Mangiocco and their son Matthew of Tampa, FL. She is also survived by, son Cosmo (Celeste) Mangiocco, granddaughter Kim (Gene) Lapp and their children Joseph, Justin and Erika (Kyle) Bickhart; grandson Cosmo Mangiocco and his children Ashlyn and Cosmo, all of Carneys Point. Also, grandsons Hobert (Victoria) Medford and their children Hobie, Harper and McKenna of Pedricktown; Jack (Kellie) Medford and their daughter Gianna of Wilmington, DE; Thomas (Lisa) Medford and their children Taylor, Lim and Kayden of Mickelton, John Antipuna of CA and Chris Riley currently serving in the US Army. A celebration of Alpha’s life will be held on Wednesday, October 3rd at Ashcraft Funeral Home, 740 South Broadway, Pennsville, NJ. Friends and family may call at 10:00am prior to the 11:00am service. Interment will be at the Woodbury Memorial Park. www.ashcraftfuneralhomes.com

Alpha Omega (Spencer) Mangiocco, age 95, passed peacefully from this life on September 29, 2018, at Southgate Nursing Home in Carneys Point. She was born in Barren Springs, VA on February 15, 1923, and is the daughter of Corby and Maude (Horton)... View Obituary & Service Information

The family of Alpha S. Mangiocco created this Life Tributes page to make it easy to share your memories.

Send flowers to the Mangiocco family.