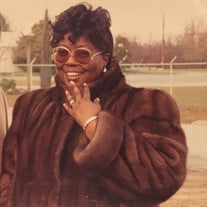 Alberta Andrews Swan was born on November 16, 1945 to the late Lawson Andrews and Agnes Cone Andrews (Key) in Portal, GA. She passed away peacefully at home on January 7, 2019. Alberta was raised in Portal, GA, and earned her education in the Bulloch County School System. After meeting the love of her life, Roy Swan, and being united in holy matrimony in 1961, they moved north to Penns Grove, NJ, and later to Lancaster, PA. Alberta furthered her education by studying accounting and finance at Salem Community College, Glassboro State College, and Rutgers University, as well as biblical studies through Jamison Bible College. Although she occasionally worked out of the home at places such as Carney’s Point Township’s Tax Office, WSFS, and Sight and Sound Theater, Alberta was blessed to be a stay at home Mom and care for her husband and four children. At an early age, Alberta joined the Scarboro Grove Baptist Church in Portal. After serving in different capacities in various churches, Alberta toiled side by side with her husband as he answered God’s call to found the Family Worship Center Church in Penns Grove in 1992. Alberta taught Sunday School, led bible study, and preached the unadulterated word of God. She was best known for her beautiful singing voice as she led the church in congregational hymns, including her favorite – Blessed Assurance, Jesus is Mine. Alberta, or “Bert,” as she was affectionately called by those close to her, loved to read the Bible, cook her southern favorites for her family, and watch The View. Her greatest joy was to spend time with her family, especially her grandchildren. She used to always say, there’s no love like what a grandparent has for their grands. Left behind to cherish her memories are her loving husband of 57 years, Roy; children, Scheralle (William), Roy Jr. (Taran), Lisa and Tomeka, six grandchildren, Xavier, Louis, Eron, Jalen, Dara, and Nicole; sisters, Sula Hall and Dorothy Lewis; sister-in-law Candacy Jones; brother-in-law, Willie Swan; and a host of nieces, nephews, relatives, and friends. She was predeceased by her parents, sisters Mildred Stewart and Zella Weaver, and brother Willie Andrews. Services will be private and at the convenience of the family. www.ashcraftfuneralhomes.com

Alberta Andrews Swan was born on November 16, 1945 to the late Lawson Andrews and Agnes Cone Andrews (Key) in Portal, GA. She passed away peacefully at home on January 7, 2019. Alberta was raised in Portal, GA, and earned her education in... View Obituary & Service Information

The family of Alberta A. Swan created this Life Tributes page to make it easy to share your memories.

Send flowers to the Swan family.