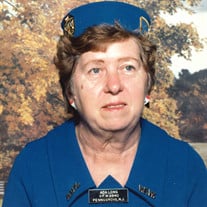 Ada L Long (née Rambo), age 90, of Millsboro, DE formerly from Penns Grove, went home to be with the Lord on Wednesday August 23, 2018. Ada was preceded in death by her first husband of 20 years, Courtland F Ottinger, Sr. She was then preceded... View Obituary & Service Information

The family of Ada L. Long created this Life Tributes page to make it easy to share your memories.

Send flowers to the Long family.